Overcoming the Cause of PTSD via Hypnotherapy and EMDR

Post-Traumatic Stress Disorder (or PTSD) is a type of anxiety-related disorder that exhibits many debilitating symptoms.  PTSD shares symptom features with the other anxiety disorders such as: specific phobia, panic, social anxiety, generalized anxiety, obsessive compulsive disorder) and has a high comorbidity with them.

70 percent of Americans are exposed on an average to a high-threat traumatic event at some point in their life. Although most people recover from temporary PTSD automatically after a few months, about 20 percent of the trauma-exposed population proceed to develop chronic and ongoing PTSD.

We always recommend that people suffering from intense anxiety symptoms, like those associated with PTSD, visit their doctor. But if you find that traditional anxiety treatment and anxiety therapy aren’t working for you, it may be time to seek alternative treatment, like hypnotherapy. When combined with treatment from a doctor, hypnotherapy can have astonishing results. Contact Revibe Therapy in Winter Park to learn more!

Psychiatrists and psychotherapists who treat patients with PTSD typically use various approaches to help patients deal with the variety of PTSD symptoms,  such as:

Treatment for PTSD and other anxiety treatment can include medications (when needed), and exposure therapies such as Cognitive Processing Therapy (CPT), Prolonged Exposure (PE), and Eye movement Desensitization and reprocessing (EMDR) .

The definition of post-traumatic stress disorder (PTSD) is an anxiety disorder that occurs following the experience of a high-threat traumatic event. An individual with PTSD is so intensely exposed to stress, that their conception of morals and values is shattered. This provokes an exacerbated amount of anxiety which is dispersed throughout your entire conscious and subconscious mind changing the brain’s Neural-Biochemistry.

PTSD is a psychiatric diagnosis under the umbrella of anxiety disorders. Exacerbated amounts of stress are followed by anxiety, and an evidence of this is the imbalance of control. Stress is defined as trying to control too many things all at once, while anxiety is a fear or worry of the future because you do not feel in control of the present.

Those with PTSD experience an intense level of anxiety, because the overwhelming traumatic experience has altered the brain’s biochemistry, and the brain then gets stuck on the attempt to process the trauma, which moves from your experiencing brain, to your thinking brain. This is the reason why victims of PTSD have re-occurring flashbacks, nightmares, and thoughts related to the Traumatic event. These flashbacks are often overwhelming and disruptive, which is a sign that it is time to seek anxiety treatment and anxiety therapy, like hypnotherapy.

What is the Root Cause of PTSD?

The  same principles for the root cause of anxiety applies to PTSD, since PTSD is an anxiety-related disorder. The root cause of PTSD is stress itself. At the time of the trauma too much happened all at once, not just at a psychological level, but at a physiological level as well.

On the physiological level, you heart rate is significantly elevated, your muscles become contracted and tense, your breathing becomes more brief and picks up on speed, and your cortisol (stress hormone) and adrenaline skyrocket in order for you to take immediate action against the threat.

With all of this happening, many things are placed on hold such as communicating the traumatic event data from you experiencing brain (sympathetic nervous system) to your thinking brain (parasympathetic nervous system). The brain later tries to rebalance this communication of data, but often gets stuck, as the biochemistry levels it usually used to store memory is out-balanced. This provokes psychiatric distress in the form of endless cycles of nightmares, flashbacks, and intrusive thoughts relating back to the traumatic event. These symptoms can be debilitating, and signs that you need to seek anxiety treatment, or alternative treatment like hypnotherapy.

Eradicating PTSD via Hypnotherapy and EMDR

Hypnotherapy has some of the best tools to navigate through the subconscious without running into the obstacles that are hard to bypass with traditional counseling such as:

These obstacles can sometimes make it very difficult for the individual to process the emotions they did not get to process back then during the trauma, and in many cases, clients get stuck even while participating in the best evidence-based practices with the most competent clinicians. Sometimes they are even stuck for months, due to how long it takes is to process through these obstacles.

Hypnotherapy is a relaxing and soothing process in and of itself, so that even when processing through the traumatic event, each session is a refreshing experience that significantly leads to faster healing. Hypnotherapy only needs 5-8 sessions to eradicate PTSD. Contact Revibe Therapy in Winter Park today to learn more.

Eye movement desensitization and Reprocessing (EMDR) borrows many techniques from Hypnosis. EMDR utilizes bilateral eye movements to mimic the rapid eye movements individuals exhibit while sleeping, in order to rebalance the conscious and subconscious mind back to baseline. EMDR is not as strong as Hypnotherapy but, in our opinion, it is the most powerful psychotherapy modality in existence to treat PTSD. EMDR usually requires 8-12 sessions.

How do I know if I have PTSD?

The PCL-5 Scale is currently used by clinicians as a measuring tool to detect the level of PTSD present in an individual. 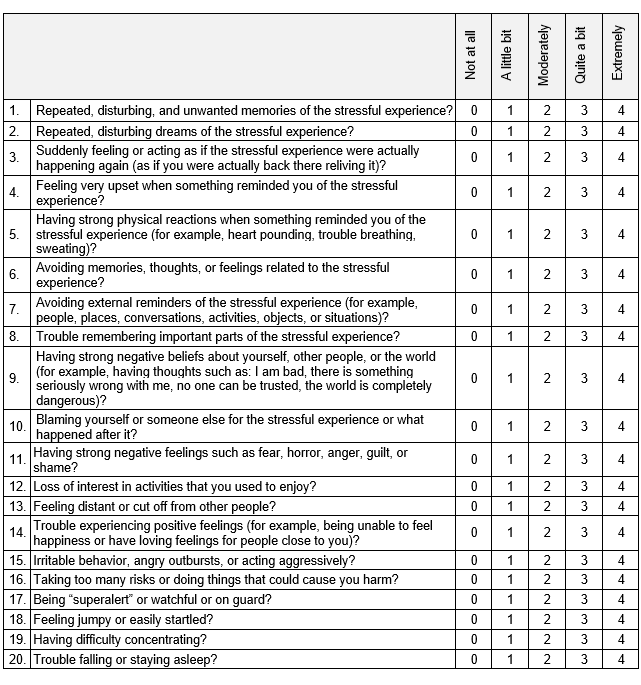